Two senior Redcaps lookout from a balcony in Harco to the covenant below. They have been reviewing the recent unassigned messengers and are down to the last of them; the troublesome ones. 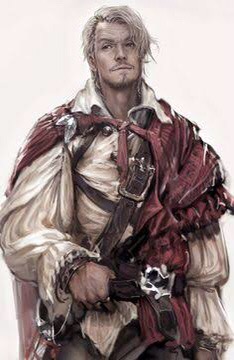 “Tell you about Guarin?” shaking head and exhaling slowly.

“He should be so much more. Noble family, educated, experienced. He came very highly recommended. Charming as all get out too. One of those fellows who made good in their early career and then started to stray. With the freedoms granted to redcaps his proclivities grew unnoticed for many years, and now his habits are probably difficult for him to control. ”

“His last brief assignment was a negative promotion, intended to set him straight. We placed him in his homeland, had him working under another recently gauntleted redcap, and also closely monitored. The message was made clear – fly straight. I believe too he tried to do the right thing, at least initially. In the end he seduced the junior redcap, caused a paternity stir in the nobility, and had a second lover defend him in some affair which ended in certamen. We’re now finished cleaning up the mess, but I’m running out of patience with him. ”

Watching her face, “So he’s useless?”

Sounding a little despondent, “No, far from it. He needs a focus. A challenge. Guarin speaks of wanting more and doesn’t always intend for the indiscretions to happen; if that’s believable. ”

“If you’ll take a recommendation? Place him elsewhere. Set him apart from our core, throw the worst of it at him and see if he rises to the challenge. You sent that drunkard Jernot to the steps of Novgorod to be rid of him, and we were done with him. So give Guarin an assignment distasteful, but close enough that he can be monitored. If he rises, then we have recovered him. If he fails then he does so without affecting the wider House and Order. ”

“We have a need in (to be determined) where that rabble of odd-bod magi are. And I think Guarin knows one of them. ”

Laughing slightly, “why is that not surprising! Done. Send him. ”

…”now onto Franc of The Ice Steps?”

“No. Dinner. I can’t face a discussion of Franc on an empty stomach.”

“I guess I always knew I’d get into trouble eventually, and if I had my time again I’d not change much. Well, a few major things. OK, a lot of things, but it has also been wonderful too” – Gaurin, during cross examination in a recent family intervention.

Gaurin was born to a Mercer family and knew from childhood that he would be trained as a Redcap. It was unknown to his parents that the philandering ways of both his grandfather and great grandmother would express their fae aspects in him so strongly as he grew through adolescence.

By mid-way through his Redcap training he was growing very used to the social aspects of his role, and enjoyed the attentions received in many of his journeys. The trainers watched and initially dismissed the attention due to his natural beauty and the hot blooded nature of youth. As he grew into manhood Gaurin understood how to be more discreet, and kept the majority of his liaisons secret. The Mercer family and the House were bitterly disappointed when the romantic encounters came to light one after the other over time, and his reputation was severely blemished. The House tried to take measures to curtail him, but Gaurin enjoys these vices too much to give them up altogether.

As a young man Gaurin found an interest in understanding and socialising with members of various nobility and was wonderfully pleased by the special attention he was given. Sadly the nobles he mixed with proved time and time again that even the most charming boy was not to be taken seriously and the too frequent conflicts have soured Gaurin’s attitude toward their class. As an adult their backbiting squabbling and vicious natures raised his ire, and he now cannot see their value. “A class for the nihilistic and selfish.”

Most recently the House placed Gaurin back in his homeland in France with ample opportunity to connect with his family. Although this started well, his Mercer elders took to micromanage his activities which met with a dour response. Gaurin rejected the constant monitoring and meetings requested of him as they distracted from his efforts to build his knowledge of the network. He did not wish to depend on his family for his network and fought the intrusion on his life. Soon what am started as suggestions became orders, then orders became chaperoned daily tasks. He hated almost all of it, until a wonderfully witty and charming redcap named Nuet was escorting him. Gaurin enjoyed her company and the two got along too well. The two formed a passionate relationship which soured immediately a year later when Gaurin’s private and shared thoughts were shared to the local Mercer House. Nuet had been gossiping far more than their travels together, and Gaurin felt again betrayed.

Worse too that the betrayal involved sharing of details of a set of meeting between two senior Magi in the tribunal which both junior redcaps knew about, yet Gaurin was blamed for the gossiping. He refused to confess to the gossip and additionally refused to place Nuet in harms way, foolishly still wanting to save at least part of his relationship with the girl. The final confrontation exonerated Gaurin, not before a Certamen forced all hands and spells were cast in anger. His chivalrous attitude was noted by one senior Redcap who then sent him on his way to (region of Black Sheep covenant) start afresh.

Oddly Gaurin has formed a flirtatious relationship with one of the two senior Magi in the squabble, which his House again looks down upon.

Educated (50/50), Redcap (Enchanted Devices: 0/70) [Enchanted Devices: 70/70], Second Sight*, Strong Satyr Blood (Com and Pre Totals: +1 with sexually compatible characters) [Physical Quirk: Purple blood], Unaging, Venus’ Blessing (Bonus: +3 Com and Pre with sexually compatible characters), Warrior (50/50), Well-Traveled (50/50)*, Black Sheep (Mercer Family), Lecherous, Vulnerability to Iron [(from Guardians of the Forest) Cold-forged iron is painful to you, and you will do anything to avoid its touch. It will not actually harm you, however.], Hatred (Noble Class)

Buckle of Seven Leagues (ReCo 35 / AnAqTeHe)
As per Seven League Stride. Activated by the wearer humming a selection of specified notes. If an AC is used, it is touched to the buckle.
(base 30, 24 per day +5)

Amulet of Childlike Faith (ReMe 20)
As per Blessing of Childlike Bliss. Activated when wearer touches their index finger on the underside of the hand quickly three times.
(base 4, +2 voice, +1 diameter) (24 uses per day +5)