Bringing today that I picked up Ars Magica books Antagonists, Grogs, and The Cradle and the Crescent in hardcover as a late personal present. While they’re unlikely to dramatically change the material I write I have already found an odd snippet just by flicking through the physical books instead of using a pdf.

I’m reading a new comic at present specifically because it has an Ars Magica feel – Lake of Fire. I’ve waiting for the trade paperback version because reading the smaller issues is really irritating, I prefer to binge on comic and TV stories.

The story synopsis is:

It is 1220 AD, and the gears of the Albigensian Crusade grind on. When an alien spacecraft infested with a horde of bloodthirsty predators crash-lands in the remote wilderness of the French Pyrenees, a small band of crusaders and a Cathar heretic are all that stand between God’s Kingdom and Hell on Earth.

Yeah you read that right; Aliens and Crusaders. It’s awesome so far.

I’m not a historian but do have a passing interest in both history and comics. Recently I read Crecy by Warren Ellis which is an overview of the Battle of Crecy, as told down the lenses to the reader by a racist lout English bowman.

And it’s really worth a read, but some aspects play to particular tastes.

I’m glad to have read it and was also interested to see how the writer and artist took a very confined scope and brought a story into it. The reasons and backstory is glossed behind the view of the main character, with enough context to allow the story to land on the page.

Crécy is a graphic novel written by Warren Ellis and illustrated by Raulo Cáceres, depicting some of the events surrounding the historical Battle of Crécy. The graphic novel was published in 2007…

For – Arts style (a) suits the period darn well. In fact it is beautifully matched to the setting. There is no overstylised covering of the panels or tricks, and reflections of art from the period is used in places to make a counter illustration style very effective. The use of black and white makes the mud and blood mix, and the gore is stark. I really like the art, it’s a key reason the comic is very accessible.

To the camera voice (b) of the main character is very useful to draw in the reader, as is the modern language used to the reader as constructed to the language of the character when they are “on-stage”. His narration does help join the story together so that the reader follows all the events; although it’s not a complex story.

Panel transitions are clever (c) and the story moves very well. It’s also a good primer on the battle (d) which fed to my interests and the level of detail in the maps and tangential information is great. I’ve no idea if they’re accurate but they are well suited.  END_OF_DOCUMENT_TOKEN_TO_BE_REPLACED

Autumnlands is a comic that I wasn’t sure about, but quickly liked. The story starts simply and gets more fantastic and magical as it progresses. After reading the first collection there is certainly more going on in the backstory that will be revealed than the initial story gives you – and I’ve several guesses that I’m keeping to myself for now. The wider story arc called “Tooth and Claw” plays out in issues I’ve not yet read but am looking forward to. Weird magic (floating cities, rituals of summoning, muto corpus / animal based hybrids in Ars Magica, lightning spells), beasties, rapid melee with swords and spears – what’s not to like?

I found a neat little book in a book shop this week on the Introduction to the Study of the Middle Ages, named Thinking Medieval, by Marcus Ball.

A review from Goodreads said,

Okay, so this isn’t really a mass-market paperback, but nor is it an over-the-top practice in being an erudite ass. Bull’s examination of what we mean–and what we DON’T–when we talk about the Middle Ages is funny, fast, and incredibly well-argued. Although it can be a little depressing (as a medievalist) sometimes, it’s very honest about the field and its uses and what those interested in the medieval era should be aware of when they’re discussing it with those studying it, those mocking it, those thinking they know about it, and everyone else. 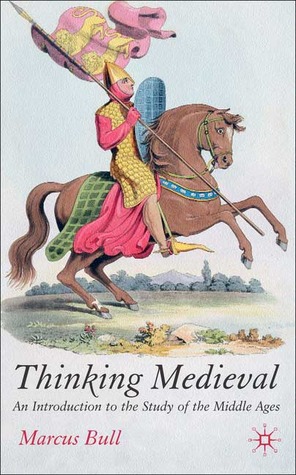 The book is not about the history of the period all, but acts as a primer for the way to start thinking about the medieval period in a study context – how to think about the era as a student.

I find it interesting as a fan of the period that I’d stumble upon a book like this randomly.

It feels like a gateway book for more serious consideration into understanding the period from an academic perspective.

I’m really looking forward to reading it in full, and what I’ve read so far is very informative.

Here are some stunning visualisations on what Middle Earth might look like from space, as created by a set of insane folks (via Middle-Earth From Space). Kind cool.

GRRM is the anti-romantic. Fairy tales go to Westros to die.

Over here on IO9 there is a little thread about what will happen to some characters. It has spoilers in it for those folks who are watching the TV show, but have not read all the novels. I really think this captures what A Song of Ice and Fire’s setting is like.

The hate for GRRM’s treatment of characters is there in the comments, as to is the love for the very same cruel, unbalanced, and distasteful setting. I love it.

Picking who will be alive at the end of the next book is a fun game, and I won’t ruin the TV folks day by guessing here. My prediction though is a confrontation between the big two families of Starks vs Lannisters for who gets a solid piece of a Targaren, and then takes the throne. If you think any of those families are out of the running you’re cont considering how sweetly perverted GRRM is.

Art was found via Google search on Deviant Art, by Skworus (tumblr)- and is darn nice.