Mentioned in a blog post, a reworking of cannon spell Assume the Stature of the Giants of El Cid (MuCo10, MoH, p.49).

Assume the Stature of the Titans of Rome

Caster’s body and equipment is increased to +6 size. At size +6 humanoid is truly massive, approx 100 times the weight of a normal human. At Size +6, the caster’s wounds have 11-point increments.

Morat is a combat oriented Magus for a play-by post-game who is deliberately gruff and also highly focused on physical mundane combat.

Designing Morat for the game was simple as Ars Magica has many spells which enhance combat abilities on one way or another. There were too many good options so I picked a few stable spells (Edge of the Razor, Endurance of the Berserkir) and hunted one or two from outside the base rulebook.

One stood out in particular : Assume the Stature of the Giants of El Cid (MoH p.49, MuCo15). This is a spell which increases the size of the caster and also increases their gear and equipment.

This +1 mag for gear adds legitimacy (in my humble opinion) to adding sub effects in Muto transformation spells, and also to making other hybrid Muto spells slightly easier.

If this wasn’t presented I would have argued that the increase should have been more like +2 and included a note in the spell text to force casting time requisites. Why?

Well basically these points, however these are a very pessimistic view of spell complexity:

As a counter in support of the plain +1 increase there is the notion of a small sub-effect in a spell adding a magnitude, and a large spell adding a +2.

In this case enlarging several worm items as a separate spell would:

So what is the conclusion? Ars Magica is darn interesting and play what makes you happy, is balanced, and tells a good story.

Personally I love the fact that this spell exists and it allows the Magus to be closer to mythical. On balance I’m a supporter but I can see the wider issues this introduces.

The spell when taken by Morat was boosted in effect to increase the size of the caster by a further magnitude, which I renamed to Assume the Stature of the Titans of Rome. So yeah, I took the El Cid spell and boosted it a little more – because at some point it breaks and just before that point is darn interesting. 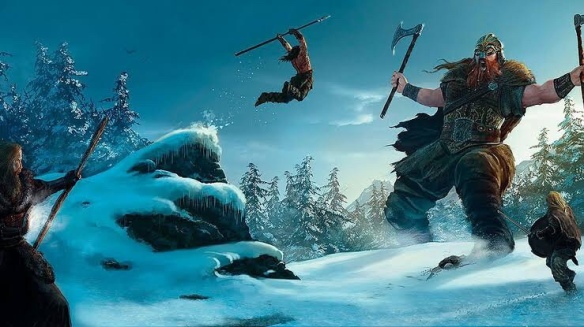 Aside – As some versions were discussed  recently on the Ars Magica forums I thought to make a ReCo spell to do the same. It is important to note the difference in the Rego Corpus baselines, of Base 2 to “make a target lose control” and to actually dictate where somebody looks which should be higher (which I commented), and then later it was proven that cannon spells exist doing both.

Well bother! New information means that a Base 2 is plausible.

The first spell here target’s a foe close to the caster, the second far further away. I’ve modified my posted higher level version so that it lasts a longer duration too, as the level 4 version is already very useful.

Causes the target to look where the caster dictates, potentially making their movements and interactions very difficult; often used to then cast Range Eye spells.

Causes the target to look where the caster dictates, often used to then cast Range Eye spells.

Its less subtle than the Mentem or Imagonem versions, as the target will certainly know they have been manipulated.

Also plausible is Rego Mentem as a way to control a target’s actions. A base of 5 will incline the target to respond in a particular way and seems more intended for emotions rather than control. A base 15 will dictate an action for a moment so it is expensive but safe.

Causes the target to look where the caster dictates, often used to then cast Range Eye spells.

Find hundreds of other new spells for Ars Magica on my New Spells page.

When I first thought about this spell I was considering the part in the movie Frozen when Anna is turned to ice, and then considered making it a killing spell – which would be fair given a base level of 25 is very close to the Perdo Corpus instant death of base 30. Instead, an opponent frozen for two minutes is likely to be at the mercy of the caster till they magically unthaw.

Curse of the Frozen Heart

The target human is turned to solid ice, reverting to normal after the spell expires.

And a variant for animals, which is far easier due to the different baseline level for turning an animal into an inanimate object.

Curse of the Frozen Hoof

The target animal is turned to solid ice, reverting to normal after the spell expires.

This and many other new spells for Ars Magica can be found on the Ars Magica New Spell Grimoire.

For November 2017 Ars Magica writing challenge – A quick variant of Bind Wounds so a magus might use it upon themselves and not have to recast a few times each day.

The targets wound close and will become no worse for the duration of the spell.

This spell is part of the free new spells compendium for Ars Magica.

Here is a doozy of a spell for a necromancer – to raise an entire bound area such as a graveyard as servants of the caster.

Raise Their Ancestors to Haunt Them

Each human corpse in the bound area is animated under the command of the caster. The corpses can obey simple instructions and perform rudimentary work without supervision.

Viewing a person’s potential likeness from an Arcane Connection is canonical (The Whole From the Part, InCo2, HoH:TL p72), so viewing a bodies likeness at a different age is likewise possible.

Touching a person or corpse, you see a rapid sequence of images showing how they might look in each year of their life and their potential appearance as they continue to age. As the spell cannot view the past or future it will instead extrapolate from the target’s current body.

Over 650+ new spells for Ars Magica can be found here.