Another not quite serious set of Ars Magica spells, this time a few inspired from the Little Mermaid. Many of the powers used in the film already exist as effects in Ars Magica – an example would be The Captive Voice for the stealing of the mermaids song, entrancement, and changing a creature’s appearance or form.

Firstly the thematic merfolk transformation spell. A published spell from Legends of Hermes (page 105) demonstrates how a mermaid transformation can be done, as a MuCo/An40 spell (youch that’s higher than I thought). I’d argue that the spell is being overly complex, but it’s a canonical resource damn it.

Turning a magical beast into a human is different again. Ars Magica Hermetic magic seems to consider transformation into a human form as reasonably easy for animals, and transformations of strange animals as approx base 15. However the basis for human to aquatic creature is level 20, I chose to forgo that here. I think the real base is probably 10 (for changing an animal into a human), and then added an additional +1 for merfolk unfamiliarity.

Transformation of Siren to Maid

This spell transforms a merfolk into a human form. The humanoid is size +0, and retains physical sympathies of its merfolk form in the expression of the humanoid’s appearance.

The target may hold a human’s hair and discard it to end the spell prematurely.

Likewise a merfolk to an animal is more like turning a land animal into another animal (hermetic magic does not differentiate between land animals, birds, or fish), so the base starts from level 5, then I modified this for the weirdness factor up to level 10.

Transformation of Siren to Wolf

This spell transforms a merfolk into a large wolf. The wolf is size -1, and retains physical sympathies of its merfolk form in the expression of the humanoid’s appearance.

A wolf’s pelt may be held and discarded to end the spell prematurely.

A spell variant could change a Merfolk to a bird or fish just as easily.

These two spells came to mind thinking about how an undersea creature would seek to aid their own movement or defend themselves.

This spell creates large underwater currents surrounding an area which make it almost impossible for creatures to swim through. All materials which move toward the currents are swept away, while within the barrier the water is calm.

The water around the target is accelerated in a vortex which propels the target in a direction of the caster’s choosing.

There is no arguing that this is a niche set of spells. This spells are part of the free new spells compendium for Ars Magica. 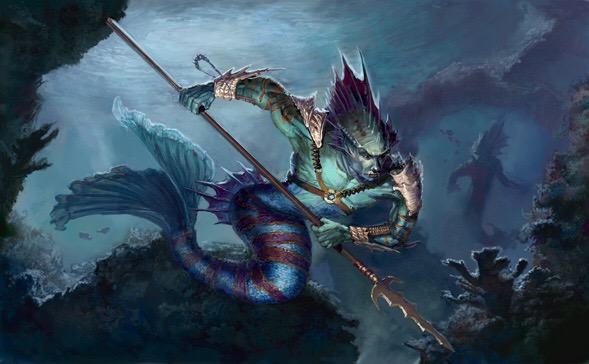