Here are some stunning visualisations on what Middle Earth might look like from space, as created by a set of insane folks (via Middle-Earth From Space). Kind cool.

There I said it, I need a Rifts (by Palladium) and Spelljammer Anonymous group. Why? Because despite these two settings and systems being hated and joked about by almost all the RPG community – I like them both. They’re not perfect, but any experienced RPG player can knock holes in almost any highly system-centric RPG. 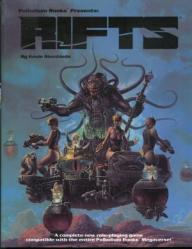 (aside – somebody needs to be taken to task for how cliche the RIFTS Australia World book is. Seriously, it’s almost a crime. Even in 1990 we knew far better than this tripe)

Like many I’ve bashed Rifts and Spelljammer for the sake of a laugh, and sometimes more seriously as examples of what didn’t seem to work well in game. However the more I think about these games the more I think that the settings had huge potential. It appears that it was the mechanics and the players ourselves who didn’t realise what me might have had.

Over on Star Gazers’ World is a post about RIFTS which I think is worth a read. Sunglar’s talking about character he loved and experienced in the setting, and it is an entertaining read for a long-in-the-tooth gamer like me. I commented:

I loved RIFTS. The setting has a huge potential to tell very deep and evocative stories, and while the mechanics in the RAW are questionable, I don’t think they are any worse than may other systems. It is a product of the thinking at the time about game systems. If it was written now I think the political setting wouldn’t change too much, but the mechanics would be far more graceful.

So there it is. The basics of a brief writing challenge, or at the very least the thoughts in this blog post. Firstly the game still needs a compelling story beyond “this is cool”, as the cool of both SJ and Rifts gets tarnished very quickly when the players get into the world and events start going sideways. Using pre-written games is a great idea for starting players. END_OF_DOCUMENT_TOKEN_TO_BE_REPLACED

I have this cunning plan to write an RPG system and setting. It’s been a plan for about 20+ years, and never really happened. Due respect to those who have done this, especially if that writing includes actually getting a book into market. Published game writers are Gods among dreamers.

Recently I got interested again and in the pursuit of that lofty and torturous goal I’ve been trying to reconcile the the need for rules light vs rules heavy RPG systems.

It took to me to a question:

In RPGs what do we actually need rules for?

To take a light approach one GM I knew used the rules only for actions directly involving the PCs against each other. All other activity was based upon their stats, but heavily weighed by discussion and story.

In another way – Rules may be used for different purposes according to the system, need, and goals of the group. I think there is a continuance for every mechanics to be written in RPG systems, where rules light discussion and story drives outcomes are in one direction, and the fully calculated results for each proposed micro-action taken within a mock physics engine are hanging in the extreme of the other. Within that range the systems are as complex as the designers felt they needed to be, so that the players are granted the ability to be entertained while role-playing.

That is, the players are supposed to be entertained by the game, and the system helps in that delivery. I am not sure mechanics for the sake of mechanics are beneficial at all, but they sometimes have a place (see desired clunk below)

So to take a more abstract view – I think “the rules” form the basis by which a group of people can resolve and agree the outcome of an action, sequence, or circumstance. Aww, how bloody fluffy.

But then I see rules for which the outcome is slightly divorced from the method, where the method itself is as much part of the elegance (the desired clunk) of the system itself. A mechanic which represents the lore is actually quite a wonderful and rare thing. If you know the horde mechanics in DeathWatch, that is what I’m thinking of. The lore of the game has these huge hordes, and the hordes have their own way of “moving” around the setting, being shot at, and defending. I guess any unit based controls in may systems probably have the same potential (except the old BattleSystem rules which were about as clear as the 1st Ed DnD DMG, after being translated into janglish).

So in amongst the paradigm of events for which rules help, here area few of the classics I thought noteworthy points to be differentiated from a direct answer; which is everything.

(a) Firstly combat. We as players sitting around a table cannot resolve a battle any more than we can experience the weightlessness of space. It is hopefully well beyond the group dynamic to try to really smash heads in.

(b) Inter-player social leverage. Like combat there are times when the characters will interact and behave differently from the players, and the character’s limitations or abilities far exceed our own. That leads to events where players will need to manipulate and interact with each other “inside” the story. Being intimidated by another player is probably not possible often, but two characters might have a relationship based upon intimidation, whereby the players use rules to resolve how often and how well the ongoing manipulation occurs.

It is where many “lite” systems just start having the players act and drop the dice altogether.

(c) Cohesive character generation. A game as a shared experience works best when the goals and expectations of the players match. Mix a bastard lying prick in amongst three noble hearted characters and you’ll have some dramatic tension in the short term , but eventually the nice guys might leave the bastard by the roadside. Or a team full of bastards implodes well before the plot is found.

Keep the toons within a respectable range of similar ethos, power level, and story tone. No point having a silly jokester in a game based in a grim-dark setting.

(d) Wealth, travel, and the burdens of life. This deals more with having parity and consequences.

In the list above I have left the interaction with NPCs off the critical list, as I think they are secondary to the interaction between the players, and also mirror the dynamics that are used between player characters. Once the rules for PCs are resolved the NPCs just re-use them. Yes, the King might be an impressive guy, but he’s no different from any other NPC in the setting – a lever to move the story, and a few stats to support it.

There is also a point at which all the talk of a good or bad, or even the right rule-set becomes irrelevant, which is when the players switch around with it within the game. Deciding to ignore the rules for the benefit of the story is something that I support, but there is also the players who will support the rules as a final arbiter over the story – and either is fine depending on what the players want.

So yes, it is darn tricky. Once those areas as sussed the rest of the mechanics are likely resolved in the same manner with slightly different stats.

When I get around to posting what choices I make, and thrashing them – you’ll see it here.

GRRM is the anti-romantic. Fairy tales go to Westros to die.

Over here on IO9 there is a little thread about what will happen to some characters. It has spoilers in it for those folks who are watching the TV show, but have not read all the novels. I really think this captures what A Song of Ice and Fire’s setting is like.

The hate for GRRM’s treatment of characters is there in the comments, as to is the love for the very same cruel, unbalanced, and distasteful setting. I love it.

Picking who will be alive at the end of the next book is a fun game, and I won’t ruin the TV folks day by guessing here. My prediction though is a confrontation between the big two families of Starks vs Lannisters for who gets a solid piece of a Targaren, and then takes the throne. If you think any of those families are out of the running you’re cont considering how sweetly perverted GRRM is.

Art was found via Google search on Deviant Art, by Skworus (tumblr)- and is darn nice.

After watching all the Dr Who content and finally being “up to date” I can say without hesitation that I dislike the “deus ex machina”-ish and “hand-waving” that occurs in almost every story. Not enough to stop watching the show, but enough that I’ll be waiting before I watch again.

The Matt Smith seasons were full of improbable solutions, tap dancing around plot holes, and frankly some very over used side characters. i.e. That perky Sontarin, the Lizard Face lady, and Mrs BadWolf are top three on my list of frustrating npcs that could have been used either differently or a bit less.

By contrast I liked the background to the “impossible girl”. It made sense enough. It helps that she can act too. OK, the insanity is not to Matt Smith alone – but I recall thinking very oddly about a the Pond lady abandoning her child to a destiny as an assassin. Even when she then knows that the kid grows up fine, I cannot think a parent would really do that.

Lastly, I’d like to see the Dr have plans. Schemes even. He has been a mad-man-with-a-box for a while now, and it feels time enough for his superior intelligence, preparation, and observation to be the factor that makes him such a formidable adversary. No more “not having a plan” or yelling “don’t you know who I am” at each alien.

If that were an NPC in a roleplaying game the party would have shot him 100s of times. Or as a player I would have.

Anyway, like a typical geek I can not resist a complaint about a show I enjoy.